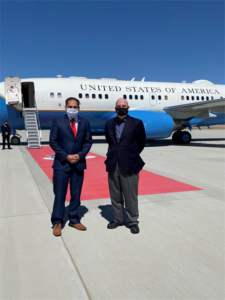 “It was an honor to have Acting U.S. Air Force Secretary John Roth visit Palmdale’s Plant 42 and I want to thank him for taking the time to learn about the important role Plant 42 plays both nationally and locally,” said Garcia. “Plant 42 plays a critical role in our nation’s defense and provides a significant job source for Californians in the 25th District. The work being done at Plant 42 helps advance and improve our military’s presence and strength in air and space.  I am grateful that the U.S. Air Force Acting Secretary Roth was able to learn and see the important work being done at Plant 42. I remain committed to ensuring that programs at Plant 42 remain fully funded and that we provide needed infrastructure modifications to ensure that the plant has access to basic needs like clean water and cell reception. I look forward to advocating for Plant 42 both as a member of the House Appropriations Committee and on the Science, Space, and Technology Committee.”

“It is impressive to see that in just three years the B-21 went from a digital design to two test articles on the production line. The Department of the Air Force appreciates all the hard work and dedication by the joint U.S. Air Force and Northrop Grumman team making it happen,” said U.S. Air Force Acting Secretary Roth.